Sarahbeth Maney, a sudden photojournalism star from Washington, plans to move to Detroit in June after a year-long fellowship with the New York Times.

Maney, 26, caused a stir this week with a photo that went viral from the first day of Justice Ketanji Brown Jackson’s confirmation hearing at the Supreme Court. She snapped Leila Jackson, 17, looking at her mother with emotions every parent hopes to win. A Detroit Free Press arts and culture reporter expresses pride for a future colleague by sharing Maney’s tweet about the image:

The young woman who took this powerful photo is coming to work full-time for the Detroit Free Press this summer. #detroit #Michigan https://t.co/Pq5K2piFF7

The pride portrait is grabbing national attention, just like the 2019 college graduate who captured it. The New York Times asked his collaborator about the photo which he describes as “one of the most shared images of the event”. The Oakland, Calif. native also spoke to the NPR station in her home area, KQEDand did interviews Saturday with Detroit’s WDIV and MSNBC, among others.

Friday, an essay she wrote about this flash week was published by NBC’s “Today” show. An extract:

Seeing it spread so widely and shared by famous public figures, such as Martin Luther King’s daughter, Bernice King, Meena Harris and other public figures, seems like the greatest honor. It was amazing to see such positive reactions and I hope it inspired people to be proud of who they are. …

I want my visibility to show that black women are fully capable of being photojournalists and reaching great heights in their own careers, despite all that we have to fight for representation and respect. … There are not enough black women in photojournalism and I hope to pave the way for more to join our industry.

“What a powerful and necessary photo,” Bernice King tweeted Thursday. 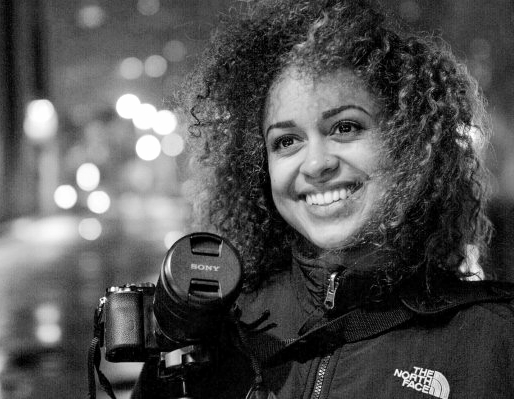 Maney’s journey after earning a photojournalism degree at San Francisco State University three years ago includes five months as an intern at the Flint Journal in 2020, followed by three months at the San Francisco Chronicle. She has worked as a freelancer for The Washington Post, The Wall Street Journal, Time, Vasnity Fair, CNN, The Guardian, HuffPost, Bloomberg and Forbes.

“This was my third time applying for The New York Times Fellowship,” she told KQED in a conversation published today. She is the newspaper’s first black fellow.

Now she is savoring a “very proud but overwhelming moment,” she told The Times.

I’ve worked so hard to get where I am and be recognized by so many people – it’s just an amazing feeling.

On Friday, future photojournalist Freep – who sometimes uses “SB” in place of her nine-letter first name – was hailed on instagram by a New York-based network called Black Women Photographers. “Look at what black women can do when they have the chance,” he posts.